The set subject for the Melbourne Camera Club August 2009 EDI (Electronically Displayed Image) competition was "Abstract", and as an abstract concept I thought of manipulating the image of Ray that I had taken. I am pleased to say it won a "Commended" award, as well as getting a good reaction from the audience: 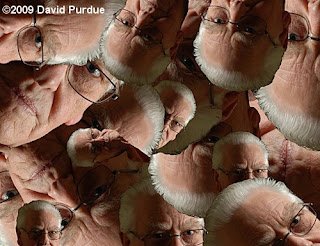 I have since been asked how I created that image, and invited to give a talk on that at a future meeting of the MCC Digital Group. So here, briefly, is what I did.

Starting with the photo of Ray, I loaded it into GIMP and copied it on to a new layer with a transparent background. I then used the eraser tool to wipe away all the black background, and also Ray's coat and shirt so I was just left with his face and neck, the rest of the image being transparent.

I sorted the layers so that the larger scale copies were at the back, and the smaller ones at the front. This gives the image more complexity - if a large copy was at the front, then it would hide the smaller ones. I then moved the images around by hand until they were in aesthetically pleasing locations.

One final complication was that using the order of layers did not always give the exact look I wanted. For example, if you look at the bottom of the image just to the right of centre, you will see three copies (let's call them A, B, and C). Note that A is in front of B, B is in front of C, and C is in front of A. This can not be achieved with simple layering.

So to do this, I used layer masks. A is in fact in front of B & C, but to make it appear to be behind C, I apply a layer mask to A. Then in layer C I selected all the transparent section, and applied that selection to the layer mask of A (using some manipulations that I won't go into the detail of here). Thus, the only parts of copy A that show are the parts that are transparent in copy C, thus A appears obscured by C, and hence behind C.